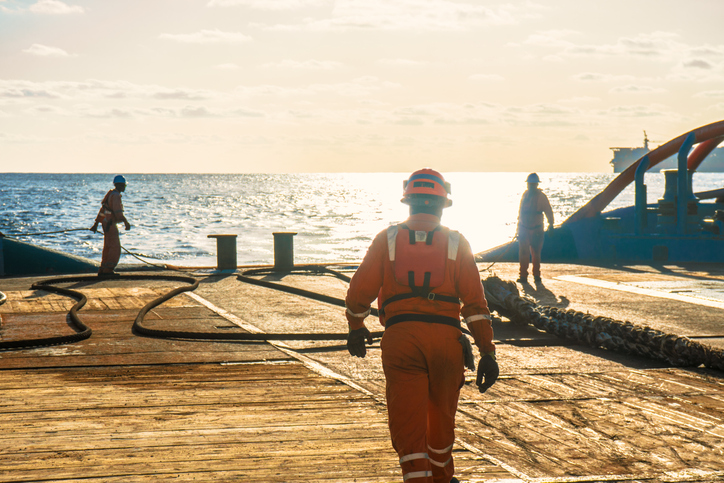 When do construction workers meet “status” for coverage under section 902(3) of the Longshore and Harbor Workers’ Compensation Act (the Longshore Act) (33 U.S.C. Section 901 et seq.)?

Any expert in coverage issues under the Longshore Act can promptly answer that question. The answer, of course, is, “I don’t know.”

But an educated guess is possible after a few background questions:

This should serve as a sufficient starting point, so let’s proceed from the application of general principles to particular situations.

Note: When we ask, ‘Does the project serve a maritime purpose?’, we are really asking if the project has a realistically significant relationship to traditional maritime activity involving navigation and commerce on the navigable waters of the United States. Not all construction, renovation, repair, or maintenance taking place on a maritime situs necessarily serves a maritime purpose. We’ve seen cases, for example, where building a sewage treatment plant or repairing missile silos did not meet maritime “status” for coverage under the Longshore Act.

Not only those workers who directly handle cargo or work directly building or repairing vessels can meet maritime status. Renovation, maintenance and repair of buildings housing shipyard or cargo handling machinery and in which shipbuilding, ship repair, or cargo handling operations are performed is essential to maritime operations and meets status for coverage under the Longshore Act.

The First General Principle applies not only to workers renovating, maintaining, or repairing the buildings, but it also applies to workers doing maintenance and repair of the machinery and equipment used in the cargo handling, ship repair, and shipbuilding operations. These workers also meet maritime status.

Not all construction work done on a maritime situs is maritime employment. You must consider not only the location but also the purpose and use of the structure being worked on.

There are two broad factors in the evaluation of maritime status for construction workers; the purpose or function of the building or equipment being worked on (see General Principle Number Three) but also the timing of the construction work in relation to maritime activity.

Examples and Illustrations from the Jurisprudence

Chesapeake & Ohio Ry. Co. v. Schwalb, 493 U.S. 40 (1989) is a landmark case from the U.S. Supreme Court establishing among other things that a railroad employee whose work involved repairing and maintaining the machinery used to load coal onto vessels was covered under the Longshore Act (see General Principle Number Two).

Luckern v. Richard Brady & Associates, 52 BRBS 65 (2018), is a recent case that reminds us that repair and maintenance of buildings integral to the shipbuilding process is maritime employment.

Just one more since these are firmly established Principles: Wakely v. Knutson Towboat Co., 44 BRBS 47 (2010). This case involved a carpenter who worked repairing and remodeling shipyard buildings. He met status and was covered under the Act.

So, under our first two General Principles workers on a maritime “situs” who repair, renovate, or maintain the buildings, equipment, and machinery used in cargo handling, ship repair, and shipbuilding all meet maritime status for coverage under the Longshore Act as integral or essential to maritime activity.

But now we’ll consider the application of the Third and Fourth General Principles. When and to what extent do the timing of the work and the nature of the building, equipment, and machinery affect the issue of maritime status?

The case of Weyher/Livsey Constructors, Inc. v. Prevetire, 27 F. 3d 985 (4th Cir. 1994) involved the claim of a pipefitter who was injured while building a power plant on the premises of the Norfolk Naval Shipyard. The Court, reversing the decision of the Benefits Review Board (BRB), distinguished between new construction and the repair of existing shipyard structures. The power plant would eventually, arguably serve a maritime purpose, but this would be in the future. Future maritime use did not confer maritime status.

Note: In a later case that arose while the same power plant was operating supplying power to the shipyard a worker who maintained and operated the power plant equipment did meet maritime status as his work was integral or essential to ongoing, current shipbuilding activity (Kerby v. Se. Pub. Service Authority, 31 BRBS 6 (1997), aff’d 135 F.3d 770 (4th Cir. 1998)).

The question of future maritime use arises regularly, and the consensus is that maritime use only in the future does not meet maritime status. We can look at just a couple of other examples:

Southcombe v. A Mark, B Mark, C Mark Corp., 37 BRBS 169 (2003) considered construction of a yacht facility on the Elizabeth River. The worker’s relationship to the property was temporary, only for the duration of the construction project, and any maritime use would occur in the future after he was gone.

Boyd v. Hodges & Bryant, 39 BRBS 17 (2005), involved the claim of a worker installing plumbing systems and electrical cables in a gutted, not in use building on a shipyard property. Once again, the worker’s presence on the site was temporary, and any maritime use would occur only in the future. He did not meet status.

As noted above, the purpose of the structure under construction is relevant. We mentioned sewer treatment plants and missile silos. Here’s another example:

Moon v. Tidewater Construction Company, 35 BRBS 151 (2001) involved the construction of a warehouse on a naval base that was only to be used to store spent nuclear fuel. Not only was it to be for use in the future, but it was not a “uniquely maritime structure.” No status.

So, what confident opinions can we offer? Construction workers on a maritime situs who are renovating, repairing, or maintaining the buildings, machinery, and equipment used in cargo handling or ship building/repair will meet maritime status and will be covered by the Longshore Act. Questions arise if the construction site will see maritime use only in the future and if the structure is not maritime in nature. In these inquiries it will be relevant that the worker is on the maritime site only for the duration of the project.

What about pier, dock, and seawall construction? I’m not including bridge construction since we recently discussed that separately. General Principle: Pier/dock construction or repair is generally considered to be maritime employment. Here are some legal examples:

Building or repairing docks is covered employment either because it is integral or essential to maritime activity or because the worker qualifies as a “harbor worker” (refer to title of the Longshore Act) whose work directly affects maritime commerce.

Remember that the project must be on navigable waters of the United State and must serve a maritime function either directly involved in maritime commerce or shipbuilding/repair or indirectly under the theory of status as a “harbor worker.” Work building a seawall to protect a highway did not meet status (Silva v. Hydro-Dredge Corp., 23 BRBS 123 (1989)).

Make sure that you have all the facts before deciding whether workers on a construction project meet maritime status for coverage under the Longshore Act. As always, if there’s any doubt, get coverage.

Jack Martone joined The American Equity Underwriters, Inc. in 2006, where he serves as Senior Vice President, AEU Advisory Services. Prior to AEU, Jack served for 27 years in the U.S. Department of Labor, Office of Workers Compensation Programs, as Chief, Branch of Insurance, Financial Management, and Assessments and Acting Director, Division of Longshore and Harbor Workers' Compensation for the U.S. Department of Labor. As Branch Chief, Jack directed the licensing and regulation of insurance carriers and self-insured employers under the Longshore and Harbor Workers’ Compensation Act. Jack received his bachelor’s degree from Fordham University and his Juris Doctorate from St. John’s University School of Law.