Interesting Longshore Cases From 2019 – Part One 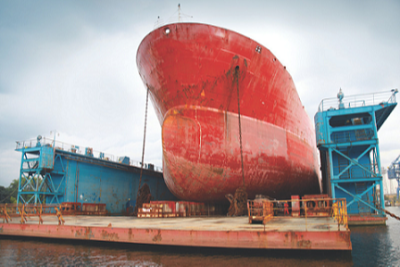 There were several interesting court decisions related to the Longshore and Harbor Workers’ Compensation Act (LHWCA, or Longshore Act) and the maritime industry that were issued during calendar year 2019, including one at the U.S. Supreme Court.

The Outer Continental Shelf Lands Act (OCSLA) extends federal laws to the outer continental shelf of the United States (OCS), and it deems the laws of the adjacent states to be federal law to the extent that they are “applicable and not inconsistent with” federal law (43 U.S.C. 1333(a)(2)(A)).

The issue in the Newton case was under what circumstances state law is deemed to be federal law.

The plaintiff filed claims alleging violations of several California wage and hour laws among other state law claims. The case ended up in federal district court, where the court ruled that federal law (OCSLA) applied. On appeal the Ninth Circuit Court of Appeals vacated and remanded, holding that state law is “applicable” under the OCSLA whenever it pertains to the subject matter and is “not inconsistent” with federal law.

The U.S. Supreme Court reversed the Ninth Circuit and adopted the approach taken by the federal Fifth Circuit. State laws are adopted as federal law only to the extent that federal law does not address the relevant issues. Federal law is exclusive on the OCS; there is no overlapping state/federal jurisdiction. Since the federal Fair Labor Standards Act addressed the issues in this case, state law did not apply.

The holding in this case can be summarized succinctly. The U.S. Supreme Court reversed the holding by the Ninth Circuit. A plaintiff may not recover punitive damages on a claim for vessel unseaworthiness.

This is primarily a situs case, which also includes issues of status, maximum medical improvement, and diligent job search for suitable alternate employment. I found the situs discussion most interesting.

The claimant was an “assistant shift foreman” at an oil and gas storage facility on the Mississippi River. The facility stored oil products in tanks. The product arrived and left the facility by vessel.

Was the facility a “marine terminal”? The Act does not define “terminal”, nor is the word defined in Fifth Circuit precedent. The U.S. Department of Labor’s Administrative Law Judge (ALJ), in an approach endorsed by the Benefits Review Board and the Fifth Circuit, referenced OSHA regulations, U.S. Supreme Court language, and a dictionary to find that the facility was a “terminal”.

The importance of this finding was that the facility was thus an “enumerated site” in section 903(a) of the Longshore Act and evaluated as a covered situs to the extent that it served some maritime purpose. The evaluation of the facility not as an enumerated site but rather as an “other adjoining area” would have required that the facility was “customarily used” for maritime activity. It may not have made a difference in this case, but at least we now know what a terminal is.

NOTE: a “terminal” includes structures which are devoted to receiving, handling, holding, consolidating, and loading or delivering waterborne shipments. It is an area used primarily for the moving, warehousing, distributing or packaging of waterborne freight.

The decision also reiterates a couple more points we have seen arise recently. In the Fifth Circuit, a covered situs “…is the parcel of land underlying the employer’s facility that must adjoin navigable waters, not the particular part of that parcel upon which the claimant is injured.” It is not necessary for “every square inch” to be used for maritime activity. (Read this in light of recent cases involving living quarters and parking lots within the perimeter of an employer’s premises.)

Situs and status under the LHWCA were at issue in this case.

The injured worker was an “offshore warehouseman” on what was called the Central Facility, a fixed platform in state waters. His duties included “…shipping, receiving, warehousing, dispatching tools and supplies to different operators for use on various fixed satellite oil and gas platforms in Louisiana state waters, and loading/unloading vessels at various times throughout the day.”

In view of the general propositions that fixed platforms in state waters do not meet situs, and oil and gas work is not maritime employment, can this injured worker meet the requirements for coverage under the LHWCA?

On the situs issue, the Court found that the Central Facility was an “other adjoining area” under the language in section 903(a). It is contiguous with navigable waters and “customarily” (not predominantly or exclusively) used for loading and unloading vessels. It is not a standalone fixed platform. It is designed for loading/unloading oil and gas supplies onto vessels in support of the satellite platforms.

It is of no consequence to the situs and status inquiries that the “cargo” being loaded/unloaded would be used for oil production work. Essentially, if it’s coming off and going onto a vessel, it’s “cargo” and that’s “maritime”.

As for the status inquiry, the claimant was engaged in unloading a vessel at the moment of injury, and he actually spent 25 to 35 percent of his work time engaged in loading/unloading.

So, even though he worked on a fixed platform in state waters, he met situs and status for LHWCA coverage.

Can an injured worker be covered concurrently under both the LHWCA and the OCSLA?

The injured worker in this case was a “shipping and receiving dispatcher” at the employer’s land-based facilities servicing oil and gas rigs on the OCS. He checked trucks coming into and leaving port areas to make sure that supplies for the rigs were received. He also supervised loading and unloading of the supplies onto vessels.

Relevant to the LHWCA situs issue, the worker was living in employer-supplied housing near the loading/unloading facility, 500 to 600 feet from the water. He was required to live at the facility due to his work schedule. The living quarters were separated from the loading operation by fences. The Administrative Law Judge (ALJ) found, and the Benefits Review Board (BRB) affirmed, that the entire property comprised a “marine terminal”, an enumerated site in section 903(a). Thus, the worker met situs.

With regard to maritime status, the ALJ found, and the BRB affirmed, that the worker’s duties checking trucks coming into and leaving the terminal areas, and supervising loading and unloading, qualified as maritime employment.

On the issue of OCSLA coverage, we now know that an injury does not have to occur on the OCS. The work must have a “substantial nexus” with the employer’s OCS operations (Pacific Operators, LLP v. Valladolid, 565 U.S. 207 (2013)).

In the Spain case, the inured worker was responsible for ensuring that the supplies needed by the offshore oil and gas rigs were delivered. The ALJ found that this work had an “immediate and direct effect” on the employer’s offshore projects. The injured worker’s land-based duties loading the supply vessels were an integral part of the employer’s OCS operations, meeting the substantial nexus test.

So, the worker was covered under both the LHWCA and the OCSLA – separate exposures requiring separate insurance coverage.